EVENT News Ads
Cultural and educational event "Two generations meeting" at the History faculty 24.06.2017
Ensuring the supremacy of law and human interests is the guarantee of the country's development and the well-being of the people 14.06.2017
THE CLEARANCE OF THE SACRED RELIGION IS A PLACE OF SOCIAL STABILITY 28.06.2017
OUR AIM IS THE RIGHT OF THE LAW AND JUSTICE 28.06.2017
Meeting of two generations 17.06.2017
Open doors days in Samarkand State University 12.06.2017
The visit of the delegation of MSTU "STANKIN" in SamSU: open a new stage of cooperation between the two universities 12.03.2020
The leading scientific fellow of the Lebedev Physical Institute of the Russian Academy of Sciences is a doctor of physical and mathematical sciences L.L. Сhaykov in SamSU 12.03.2020
TRANSFORMING HIGHER EDUCATION INTO A SPHERE WITHOUT CORRUPTION - A PRIORITY TASK 05.03.2020
A master class was held at the Academic Lyceum 29.02.2020
HAPPY VICTORY! 28.02.2020
REPUBLICAN SCIENTIFIC-PRACTICAL CONFERENCE "INNOVATIVE DEVELOPMENT OF THE SAMARKAND REGION: PROBLEMS AND SOLUTIONS" 26.02.2020

On April 9, 2019, the first plenary meeting of the Samarkand State University was held, dedicated to the 625th anniversary of the scientist, statesman and public figure Mirzo Ulugbek.

At the opening ceremony, the rector of the Samarkand State University R.I. Khalmuradov and the director of the Institute of Astronomy of the Academy of Sciences of the Republic of Uzbekistan, academician Sh.A.Egamberdiev delivered a deep impression on young scientists and talented students about the reforms and prospects of higher education in our country. At the plenary meeting a film about achievements and perspectives in the field of astronomy and education in Uzbekistan was demonstrated. This year's seminar-training was attended by talented students and masters of more than 10 higher education institutions (AndSU, FarDU, NDU, TSPU, NukDPI, KokandPI, JizDPI, KarSU, Karshi branch of TUIT, NavPIP, SamSU and young scientists. It is worth mentioning that the participants of the seminar-training were given a wreath at the Mirzo Ulugbek statue on April 9, 2019 and exhibits of the great scholar's museum and the coordinates of the 1018 stars in the Zij table are directly measured they began to get acquainted with the experience. The third day training program also included acquaintance with unique architectural monuments and contemporary architecture of Samarkand. 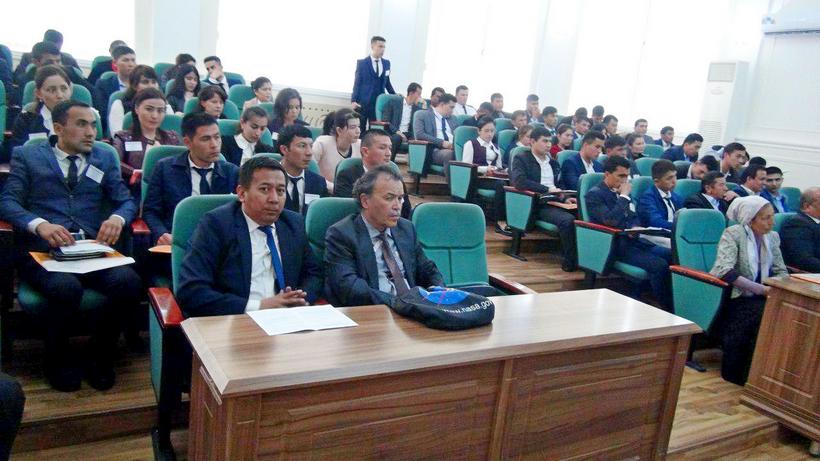